PADANG IN LESS THAN 50 HOURS

The first few days of August was full of happiness. I got to pay a visit to Batu, a small city near to Malang, and also Semarang. For the first one I went there with a bunch of friends who were struggling in the same lab for the past two semesters. Two planned trips were followed by a news from my mother which turned me excited. My mother offered me a short trip to Padang as a graduation gift. I did not expect Padang at that time, because I kept telling my mother that I actually want to go to Pontianak after the commencement. Long story short, my obsession for the main island of Indonesia (except Java) is fulfilled. My father already booked the accomodation, so that I only had to book round trip ticket. 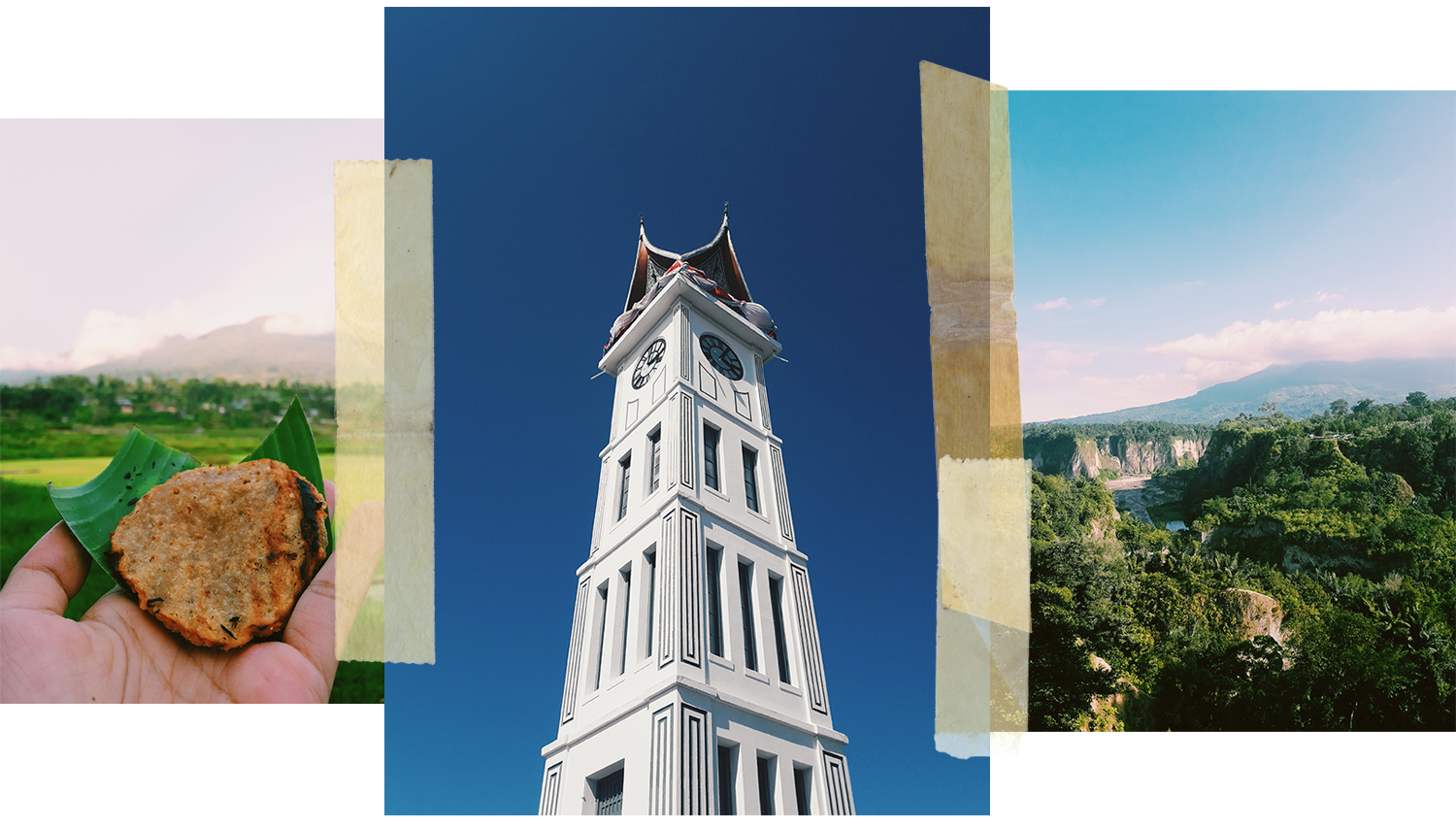 On the departure day, I had to go to the campus first before heading to the airport for gradution-related business. After the Jumuah prayer I rechecked my suitcase and stuffs that I had to bring, continued with a taxi ride to the airport. I could not be more grateful because my campus is located not so far away from the airport which makes my travelling habbit easier. However there is no direct flight from Surabaya to Padang that matched my schedule. Instead, I had to take two routes, which are the Surabaya-Jakarta route and a connecting flight from Jakarta to Padang. The transit time was short enough to pray and had a proper meal. Long story short, after the second flight from Jakarta, I was finally arrived at Minangkabau International Airport in Padang at 8.40 pm. My father, who also went to Padang for a business trip, picked me up at the airport witht two of his acquaintances, whom I called Uda Fadil and Uni Rinda.

The four of us travaled to Bukittingi with multiple stops along the way in the next morning. We started our not so short trip at 7 am. Our first stop was a kind of rest area that is located on a hill. The view itself was breathtaking. Somehow the first stop reminded me of Puncak Pass, the highest spot in Puncak where tourist usually take photos. After that we continued our trip to Bukittinggi with two more stops, which were a mosque in Solok and Singkarak Lake. The time we arrived at mosque in Solok, the weather was very foggy. Probably if we had snow here, Solok could transform into a kind of city with permanent winter, just like Siberia. I felt so stupid since I did not brought my warm outerwear for this trip. Around 9 o'clok we headed to Singkarak Lake, which is well-known for its ikan bilih.

As our rented car entered Tanah Datar, Uda Fadil offered us another stop at Istano Pagaruyung. You might be familiar with this place, even if you have not been here before. Istano Pagaruyung often appeared in school text books, as a depiction of the Minang tribe's traditional house. It used to be an istano (a Minang word for palace). Today Istano Pagaruyung served as a museum that is managed by the local government.

We arrived at Bukittingi around 2 o'clock. There was a nice parking spot in Bukittinggi that is located near to several tourism attractions. Uda Fadil parked the car there and after that we walked to a small restaurant named Nasi Kapau Uni Lis, which sells the most delicious Nasi Kapau in Bukittinggi.You have to go there on feet since it is located inside the market near to Jam Gadang. I am not a food expert, so I am sorry that I could not tell you the difference of Nasi Kapau Uni Lis versus the others. We finished our lunch less than 30 minutes and continued it with a visit to Jam Gadang. Everyone had been there before except me, so I was the one and only who took a picture there. Anyway, Bukittinggi is not only about Jam Gadang and Nasi Kapau. This city has also other tourism attractions such as Ngarai Sianok and Japanese Tunnel. Both of them could be accessed through a park named Taman Panorama. You only have to buy a single ticket to enjoy the two of them.

At 4 o'clocked we headed back to Padang through a different route. However, our mission was not finished yet. We had not checked Bika Talago and Sate Padang Mak Syukur from our list. Bika Talago is a kiosk that sells bika, a traditional cake, near to a (talago means lake in Minangnese). In my point of view, the bika that I tried tasted so good: fluffy and not too sweet. As we finished tasting the delicious bika, we continued our journey to Padang Panjang for dinner. However, the time we arrived at Mak Syukur, they were already running out of Sate Padang. Uni Rinda suggested us to try Sate Padang at Saiyo, another well-known restaurant. Thanks God they were still serving! Our gastronomy wasn't over yet. Out of the blue Uda Fadil wanted my father to try teh talua, which is actually a traditional drink that combines tea and egg! Before he dropped my father and I at the hotel, we stopped by at a saturday night market for teh talua. Honestly teh talua tasted like teh tarik, but with a thicker texture. I think it would be better if they serve teh talua with ice cubes.

My father and I finally arrived at the hotel by 10 pm. After having a proper rest and nice breakfast in the following morning, we had to go the airport to catch our flight. I flew back to Surabaya since I still have plenty of works. It feels so good to be back at work after having a moment to recharge myself.

Cheers to another trip in future!
By Jennie Yuwono on August 28, 2017

Email ThisBlogThis!Share to TwitterShare to FacebookShare to Pinterest
Label: the geek traveler